In March 2012, as part of Innovation week, CIT students took part in the inaugural APPrentice competition.  The aim of the competition was to get the creative juices flowing and to encourage the design of app ideas from students across all college faculties. The over-140 competition entries came from disciplines as diverse as mechanical engineering, horticulture, music, and multimedia.  Posters for top 20 APPs were created by business administration students and displayed in the college, drawing a large audience from among the student population.

Gerard O’Donovan, Head of School of Business in CIT, presented the overall prize in the APPrentice competition to Katie O’Sullivan from Killarney, who is currently in her final year of a visual communications degree.  Her app design, iSpoted, is a location based app targeted at creatives that will enable them to capture and share an image they like, be it a logo, piece of typography, mural or billboard.

The APPrentice competition was organised by Catherine Murphy, Colm Barry-Murphy and Colette Murphy from the School of Business. 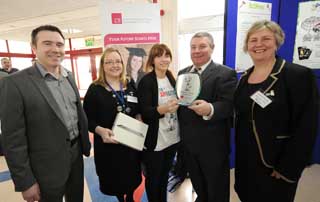